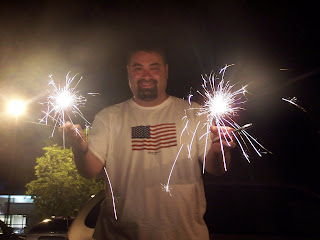 spend today knitting, and if anyone asks you why,
tell them that there's almost no better way
to celebrate independence.
if they don't believe you,
tell them in the early days of the United States
people were urged to knit
so they wouldn't need clothes
and woolen goods from England,
thus contributing to the country's burgeoning
independence and freedom.
-Stephanie Pearl McPhee 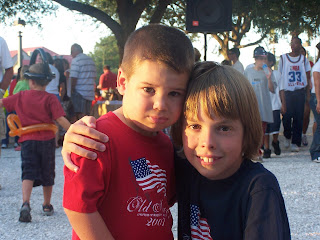 way to go, enjoy your day! your boys are too cute and much grown up since that pic!

I love that quote - although I probably won't get any knitting done today! What a difference two years makes - your guys have grown so. Enjoy your day!

happy 4th! I'll have to sit and knit! Thanks for the excuse!

Happy 4th of July! I remeber those pics!

great quote, and it is a blast remembering 4th's past with those photos! our middle schooler has changed so much.

I spent the 4th knitting too. It was sooooo darned hot here (120 degrees), I stayed inside all day!

Kristyn Knits
hello friends. I am: saved by grace, mark's wife, a mother of two. I like: organizing, taking photos, volunteering, chocolate. I create by: knitting, hand stitching, making cards, and sewing.

My Life Day by Day

Deuteronomy 15:10
The LORD your God will bless you in all your work and in everything you put your hand to.
1 Thessalonians 4:11
Make it your ambition to lead a quiet life, to mind your own business and to work with your hands.
Psalm 90:14
Satisfy us in the morning with your unfailing love, that we may sing for joy and be glad all our days.
happiness is nice, but its temporary.
joy is something different altogether.
JOY
is a constant.
it's not dependent on circumstances
or people
but rather on a heart issue.
happiness is external;
joy is internal.
joy can be tucked deep in the heart,
even in difficult circumstances.
-Karol Ladd
The Power of a Positive Woman